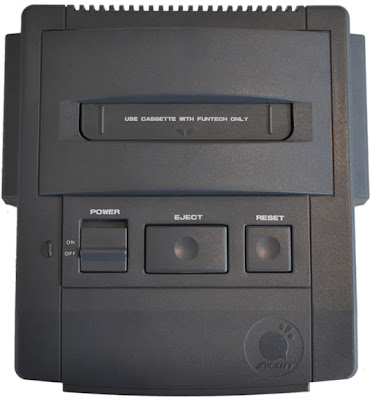 "The Super A'can was a console released exclusively in Taiwan in 1995 by Funtech Entertainment. At first glance it appears to be a Super Nintendo clone with the case and controllers bearing a strong similarity to the US version, but inside is a Motorola 68000, similar to the Sega Genesis/Mega Drive or Neo Geo. Twelve games have been confirmed to exist for the system.

Although the A'can was a powerful console with the support of several of Taiwan's largest firms developing software for it, it ultimately failed on the market for a few reasons: its initial cost was too high for most interested parties to afford, and newer, more powerful systems with 3D technology were appearing on the market at the same time (such as the Sony PlayStation). Also, as the developers were pushed to finish their games as quickly as possible (and using a rather stubborn and poorly documented development kit to do so), the resulting A'can games were, by far, nothing special.

In fact, the A'can did so very poorly on the market during its short appearance there that it lost its company over USD$6M (6 million US dollars). In the end, the company destroyed all development and production materials related to the machine, and sold off the remaining systems to the United States as scrap parts." (Wikipedia)