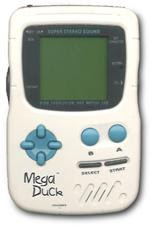 "The Mega Duck WG-108 (also known as Cougar Boy) is a handheld game console that was produced by several companies (Creatonic, Videojet, and Timlex), and came on the market in 1993. It was sold for about €60 (fl 129,-) mainly in France, the Netherlands, and Germany. In South America (mainly in Brazil), the Chinese-made Creatonic version was distributed by Cougar USA, also known as "Cougar Electronic Organization" , and sold as the "Cougar Boy".

The Cougar Boy came with a 4-in-one game cartridge and a stereo earphone.

With an external joystick (not included) two players could play against each other simultaneously." (Wikipedia)