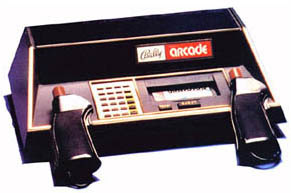 "The Astrocade is an early video game console and simple computer system designed by a team at Midway, the videogame division of Bally. It was marketed only for a limited time before Bally decided to exit the market. The rights were later picked up by a third-party company, who re-released it and sold it until around 1983. The Astrocade is particularly notable for its very powerful graphics capabilities, and for the difficulty in accessing those capabilities.

Originally referred to as the Bally Home Library Computer, it was released in 1977 but available only through mail order. Delays in the production meant none of the units actually shipped until 1978, and by this time the machine had been renamed the Bally Professional Arcade. In this form it sold mostly at computer stores and had little retail exposure (unlike the Atari VCS). In 1979 Bally grew less interested in the arcade market and decided to sell off their Consumer Products Division, including development and production of the game console.

Galaxian
At about the same time a 3rd party group had been unsuccessfully attempting to bring their own console design to market as the Astrovision. A corporate buyer from Montgomery Ward who was in charge of the Bally system put the two groups in contact, and a deal was eventually arranged. In 1981 they re-released the unit with the BASIC cartridge included for free, this time known as the Bally Computer System, and then changed the name again in 1982 to Astrocade. It sold under this name until the video game crash of 1983, and then disappeared around 1985.

Midway had long been planning to release an expansion system for the unit, known as the ZGRASS-100. The system was being developed by a group of computer artists at the University of Illinois known as the Circle Graphics Habitat, along with programmers at Nutting. Midway felt that such a system, in an external box, would make the Astrocade more interesting to the market. However it was still not ready for release when Bally sold off the division. A small handful may have been produced as the ZGRASS-32 after the machine was re-released by Astrovision.

Red Baron
The system, combined into a single box, would eventually be released as the Datamax UV-1. Aimed at the home computer market while being designed, the machine was now re-targeted as a system for outputting high-quality graphics to video tape. These were offered for sale some time between 1980 and 1982, but it is unknown how many were built." (Wikipedia)