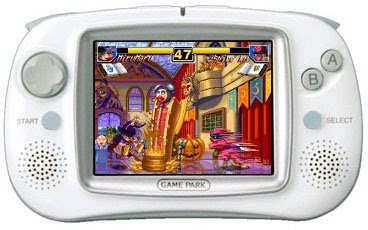 "The GP32 (GamePark 32) is a hand held console built by the Korean company Game Park.

The console is based on a 133 MHz ARM CPU. This is backed by eight megabytes of RAM. Unlike similar gaming systems, which are proprietary cartridge-based, the GP32 uses rewritable SmartMedia cards, making it very appealing for amateur game developers. The console also has a USB port for connection with a PC, and a serial expansion port.

There are three main commercial versions of the unit: the original GP32, with no light, the front-lit unit (FLU), modified for Game Park by Hahotech, and the back-lit unit (BLU), released in Europe in mid-summer 2004. At the end of 2004, Game Park also released so-called BLU+ versions, which have a different screen than the normal BLU units. All commercially released units are white with grey or white buttons. There are also a number of differently colored promotional units, and several prototype units with wildly different designs." (Wikipedia)